How many times have you been to a site, for example an animal rendering plant, chicken factory, landfill site, or effluent plant and thought that it was about time they found out how to overcome the smell? Well, by understanding the problem you can at least identify what types of products may be helpful in overcoming this problem. It’s even rumored that the Queen has the local Windsor effluent plant close when she’s in residence at Windsor Castle due to the smell! 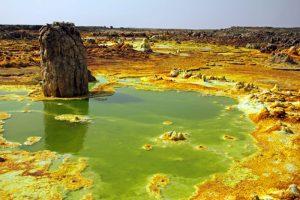 There are basically three elements that cause most smells; nitrogen, oxygen and sulphur, and all of them can be found everywhere. Fortunately not all smells are bad, those containing oxygen are usually sweet whilst those with nitrogen and sulphur usually foul.

The parent compound of the nitrogen is normally ammonia, found in all manner of household and industrial compounds such as glass cleaners and smelling salts. Whilst pungent, ammonia is not normally considered foul unlike organic derivatives of ammonia. Amines such as dimethylamine and trimethylamine give rise to fishy smells, and higher amines; tetra and penta-methylenes arise from the putrifaction of flesh. Ammonia derivatives are also associated with pet urine.

Sulphurous smells are normally associated with rotten eggs and organic derivatives such as butyl mercaptan with animals such as the skunk.

In order to detect odours the responsible compound needs to be volatile and therefore be dispersed in the air we breathe. Once airborne the compound can stimulate the olfactory glands in the nose and cause a number of complex reactions resulting in what we know as smell. With some compounds only a few molecules may be needed to cause this reaction, whilst others are capable of blocking smells when in high concentrations and become no longer detectable above certain levels. This in fact is very dangerous as it may be a lethal compound such as Hydrogen Sulphide.

Many odours are formed by dead and decaying matter and during the process of decay the organic material breaks down into other, volatile, compounds giving rise to the smell.

Odours can be controlled in 2 different ways, by masking or by neutralization.

Masking is the concept behind air fresheners in that a pleasant smell is introduced in high enough concentrations to mask the unpleasant smell. The nose then only detects the pleasant smell that gives rise to a fresh smell. The only downside to this approach is that the bad smell is not removed but stays in the background and any masking may need to be continually repeated to hide the smell.

Neutralization is the process that nullifies the odour-producing chemical, including those persistently produced. During this process the specially formulated odour control agent is atomised and absorbs the odour-producing compound, neutralizing the compound. The result is not just the elimination of the bad smell but a light and fresh smell to the location.