There are still many people flocking to the market to purchase bottled water for home use. It’s time to stop wasting money and time. Why? Because  most of the bottled water manufacturers are just using reverse osmosis as means of purifying the bottled of water you are drinking. This is a fact that many people aren’t aware of it. 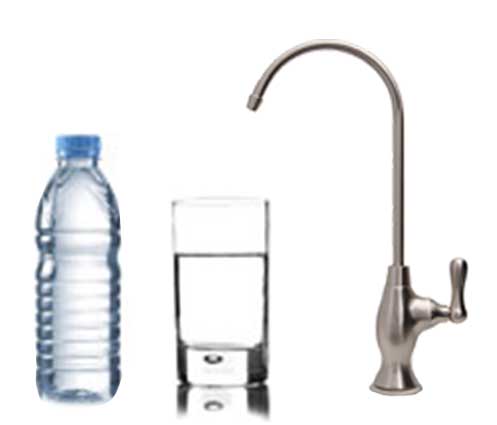 Years ago Reverse osmosis equipment was only manufactured for household consumers. In now days, it has been used by major corporations for purifying non-potable water supplies throughout the whole world. It is also used on large military and commercial ships for purifying seawater for human consumption.

Reverse Osmosis involves filtration but in a more complex way. People sometimes see it as a filter because it is much simpler to visualize. For example if you take a jar of water and put a semi –permeable membrane in it then divide the jar into two sections and place water on both sides of the membrane to an equal level, nothing will happen. But if salt is there into one side of the jar, you will soon notice that the water level in the salty side begins to rise higher as the unsalted side lowers. This scenario shows the natural osmotic pressure at work. This will continue until; the head pressure of the salt water overcomes the “osmotic” pressure created b the differences in the two solutions.

Is it safe to drink Reverse Osmosis water?

Will the RO system remove the Chlorine?

A typical filtration system will give a nice tasting water but it will not remove Total Dissolves Solids like sodium, manganese, calcium carbonated just to name a few which are present in most typical tap and well water. Residential reverse osmosis drinking water on the other hand removes sediments and other solids followed by activated carbon adsorption in removing organic compounds such as chlorine, pesticides. So basically you will get a distilled water quality.

Here is a video of How the RO system works.